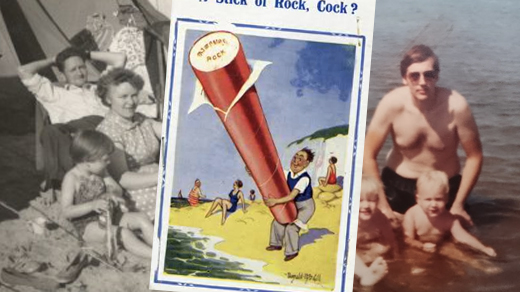 Holiday Dad is normal Dad, but with the faders all set differently. Freed from the routine of work he can indulge his passions: reading the paper, finding the cheapest bar, moving his bowels. Or maybe your dad really loved putting up windbreaks as well as breaking wind. Despite the cultural hangover of being the main breadwinner, dads seem to understand that the holiday isn’t really for them, it’s just an opportunity to dad in a different place. And maybe, if he’s very lucky, he’ll get to play darts against Bobby George in an exhibition match on a wet Wednesday afternoon in the Pontins bar.

Pier Review is a book about memory as much as it is about piers, maybe more so. Our dads are of course featured.

The whole way down the motorway my memory is jogged by certain vistas and road angles, including the moment the motorway splits and winds around a sheer drop to the right. I remember it because without fail this would be the point where my mother would freak out because she’s scared of heights, and my dad would plaintively explain that short of taking a 20-mile diversion this was the only way they could go. Looking back I’m sure there was the hint of a smile on my dad’s face.

The thing is, when you separate yourself from your normal rhythms and routines for long enough, your brain retracts and waits for more information, waiting to find the routine again. Even on holiday you quickly fall into a different routine: your dad will get up way before you to go for a walk and ‘get the papers’ and then berate you for sleeping in and ‘missing the best part of the day’. Little does he know that sleeping is for you, the teenager, the best part of the day for exactly the same reason his early-morning jaunt to the shop is for him: you don’t have to interact with your family in any way.

But we do. Our dads have even read the book, this is what they said:

“a good read , funny… did you have to have the car professionally fumigated after the three of you spending two weeks in it?”
Jon’s Dad

“I read your book – Is that rash alright now?”
Danny’s Dad (literally the only response I got from him)

So here’s some revenge, here are our favourite Holiday Dad snaps, showing our dads in classic Holiday Dad action.

Tweet us yours or your tales with #HolidayDad and we might find a free gift or two for our faves.
Pier Review would make a fantastic present for Father’s Day (19 June), by the way.

Some reviews to help you make your mind up…

“I thoroughly enjoyed this book, in a nutshell, it’s a total nostalgia-fest for anyone who ever had a seaside holiday – or day trip – to an English or Welsh resort, but it is also so much more.”

Keri Davies, writer of The Archers called it “a lovely book, laddish but lyrical“.

But despite our four-and-a-half out of five star average on Amazon, you can’t please everyone:

“Sorry but I found this book extremely puerile and would not have bought it, had I realised the bad language in it. I am a great Pier enthusiast, but was disappointed as there’s not a single picture of these wonderful piers!”. No photos, some bad language (although not as much as there was before the publishers got hold of it): perfect for dads. 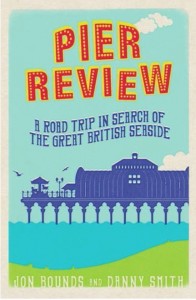 Buy now in the shops, from Amazon in hardback, in paperback and on Kindle. Also on iBooks and from good independent bookshops.

Order now, and if you read quickly and don’t break the spine it will still be a good Father’s Day present in a week.